Adam Neate was born in Colchester in 1977 and studied graphic art at Suffolk College before joining a London advertising agency. From an early age he immersed himself in hip-hop culture, graffiti art and tagging, developed his unique spray-paint style.

He chose to save money by working on scraps of card, but became so prolific that he had a surplus of work, initially he left paintings as donations outside charity shops, but became disillusioned upon discovering that these were often thrown away rather than being sold. As a solution, Adam Neate started liberating his artworks: distributing large quantities of his work, by night, about the streets of London, hanging paintings on lamp posts and wheelie bins to be discovered and gathered up by members of the public the following morning. By 2005 these 'found' works were exchanging hands on e-Bay for high prices. Not only had Neate found rapid success but also cemented his place in Art History by becoming one of the first artists to be 'discovered' online. In 2007, buoyed by the growing clamour for his work, his painting 'The Suicide Bomber' sold for £78,500 at auction. Dubbed the ‘East Anglian Banksy’, he is one of our Region’s most significant contemporary artists. The market for urban art is not as strong as it was a decade ago, but Adam Neate’s works remain sought after and are beginning to sell with some frequency at auction. His prints and street pieces on cardboard can often be purchased for low to mid hundreds but larger works are consistently into four figures. 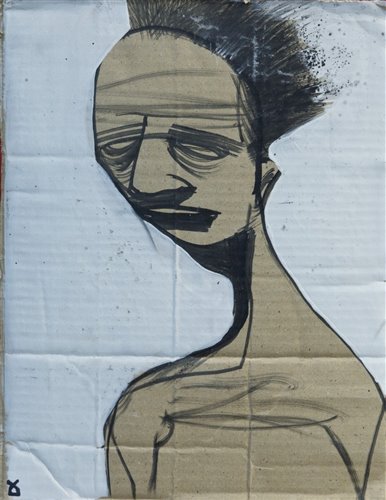