Eric Ravilious was born in East Sussex, over a relatively short but prolific career, he had a profound impact on popular design during the inter-war years.

He was trained at the Eastbourne School of Art and the Royal College of Art, where he met Edward Bawden, and studied wood-engraving under Paul Nash. He won a scholarship to paint in Italy in 1925 and in 1928 Ravilious together with Bawden and Charles Mahoney received a major commission to paint the Morley College murals. Recommended for the project by William Rothenstein, they were paid £1 per day and it took around two years to complete. Ravilious combined the project with teaching part-time at Eastbourne School of Art and it was there that he met his future wife, the artist Eileen’Tirzah’ Garwood. They initially lived together in Hammersmith but followed Edward Bawden to Great Bardfield in 1932 and later settled at Castle Hedingham. In 1933 Bawden held his first major exhibition of watercolours at the Zwemmer Gallery, a further solo exhibition at the gallery followed in 1936, but overwhelmingly his output was commercial work. He illustrated numerous books, initially with wood-engravings, in the mid-30s he took up lithography, culminating in his famous submarine series of 1940/41. From 1936 Ravilious designed for Wedgwood, he also designed for Stuart crystal and London Transport. He was an official war artist in WWII, initially attached to the Royal Marines but later working with the RAF, in 1942 he was lost in action in Iceland.

Work by Ravilious is extremely sought after at auction: his wood engravings and lithographs are relatively accessible for collectors with the majority achieving low to mid-hundreds, more scarce examples can make low thousands, or several thousands for the iconic submarine series. Watercolours are scarce and always desirable and can range up to six-figure sums. 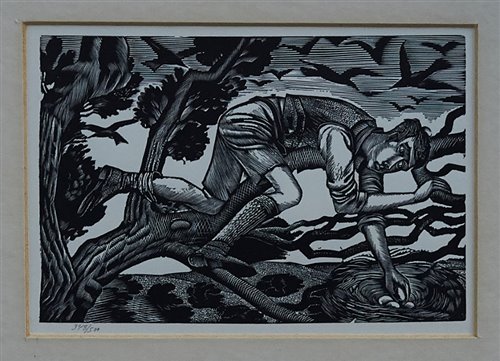