George Soper was born in Hackney and initially received little formal training but became well established as an artist and illustrator specialising in depictions of England’s farming heritage in a pre-mechanised era. He became apprenticed to a printer and stationer and worked alongside the illustrator Charles Robinson. Aged just 19, George Soper exhibited the first of numerous works at The Royal Academy.

He set about establishing himself as a book illustrator, initially working on periodicals, his breakthrough came in the late Edwardian period when book illustration was at its pinnacle of excellence: in 1908 illustrating Charles Kingsley’s ‘Water Babies’ and the following year, Mary Lambs ‘Tales From Shakespeare’, followed by numerous others. From 1916-20 he studied printmaking under Frank Short at the Royal Academy, he excelled in the discipline of drypoint etching and rode a wave of fashion for engravings throughout the 1920s.

From 1907 he lived in Hertfordshire with his wife and spent a great deal of time working in the fields, recording the activities of the farm hands and heavy horses, inspiring his best known works. He also taught and encouraged his two daughters Eva and Eileen, both went on to have successful careers in fine art.

At auction George Soper’s work is quite frequently sold and is accessible to collectors. The majority of his output was etchings, which sell for around £100 or less, watercolours typically make mid-hundreds and occasionally four figures. 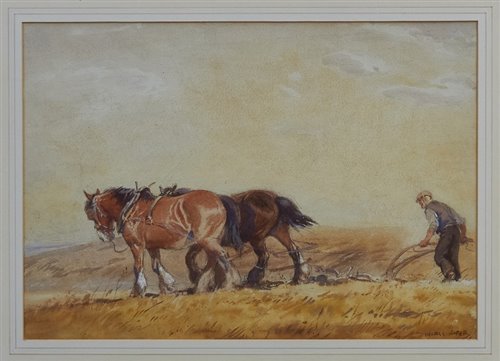