Roderick Barrett was born in Colchester to a working class family, his older brother Oliver O’Connor Barrett (1908-1989) became a well known sculptor. He trained at the Central School of Art and Design from 1936-1940, during WWII he was a conscientious objector. After the war he returned to Colchester and combined his painting career with teaching posts at the Central School, at the the Phillips Exeter Academy in America and at the Royal Academy Schools, London. In Colchester he was a co-founder of the Colchester Art Society, together with Henry Collins, Arthur Lett-Haines, John Nash, and Cedric Morris, who Roderick succeeded as president of the society in 1982. He also exhibited regularly at The Minories and in London at the Royal Academy, the Beaux Arts Gallery and elsewhere. Early in his career Roderick Barrett was principally a printmaker and wood engraver. Over time he increasingly concentrated on oil painting, working on schemes which included motifs from his youth: themes including fallen chairs, tables and candles which become imbued with symbolism in his compositions. He worked in muted colours, often on a very large scale. At auction these works are scarce but highly sought after when they emerge. 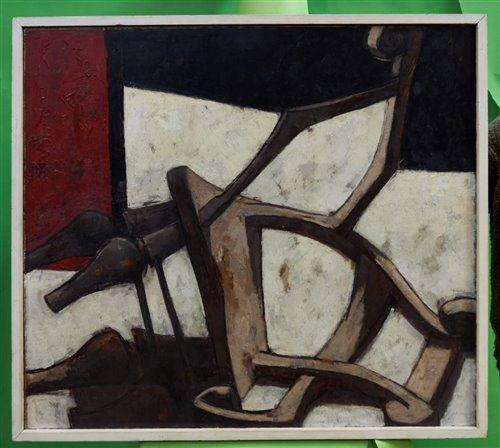