Rowland Fisher was born and lived his entire life in Gorleston, Norfolk where he painted the fishing community of the town. He was born the son of a Master Mariner and yearned to go to sea, but was instead apprenticed to a timber yard. Throughout his fifty year career at the timber yard, he drew and painted in his spare time and became an expert ship modeller. Gorleston was at this time a hub for artists, Rowland’s contemporaries included Campbell Archibald Mellon (1876-1955) and John Alfred Arnesby-Brown (1866-1955) who preceded Rowland Fisher as President of the Great Yarmouth and District Society of Artists.

Rowland Fisher was a member of the St Ives Society of Artists, the Royal Institute of Oil Painters and the Royal Society of Marine Artists, where he won the Watts Prize in 1949. His harbour side house with viewing tower permitted him unbroken views of the ships and tides, over a long painting career which accelerated in retirement, he focussed on recording the toils of the local fishermen, creating an important record of the industry of Gorleston before it’s decline.

Rowland Fisher sometimes painted watercolours but most works are in oil, the majority painted on board with a sculpted impasto style and usually on a small to medium scale. His larger works can make into four figures but the majority of Rowland Fisher oil paintings at auction have been consistently low to mid-hundreds for the past decade. 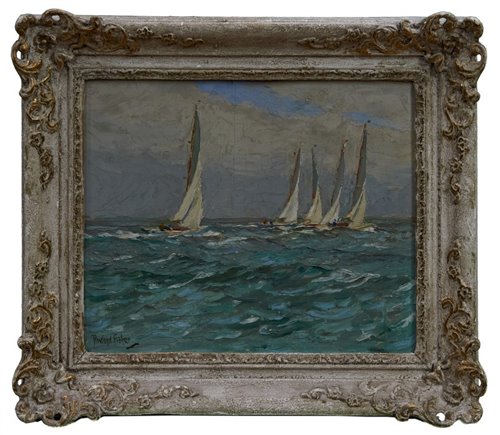